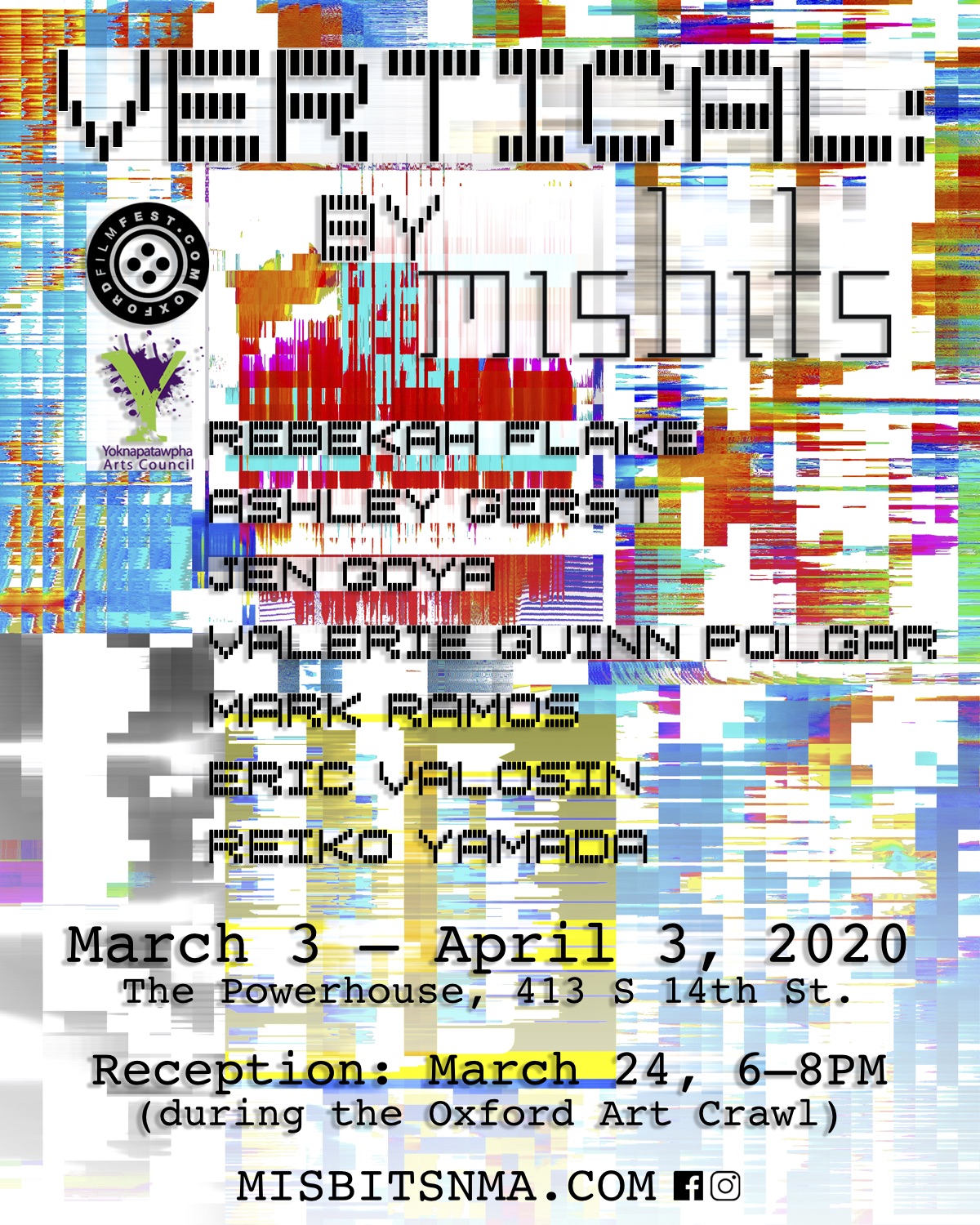 The purpose of Misbits is to serve as a facilitator that hosts opportunities for communities to view and learn about art created through the use of technology. Misbits is a platform for new media art founded in 2016 by Valerie Guinn Polgar in Oxford, Mississippi. In 2020 Misbits is growing up, becoming a non-profit organization and expanding its staff. This exhibition presents work by past Misbits participating artists as we gather momentum for the future. All the work in this show is created for a wall-based experience that will be anything but flat . . . the featured artists work in installation, sound, photography, experimental film, computation, projection, interactive sculpture and other media and will be translating their practices to a vertical orientation. Artists in Vertical include: Rebekah Flake, Ashley Gerst, Jen Goya, Hailey Hodge, Valerie Guinn Polgar, Mark Ramos, Eric Valosin, Reiko Yamada and more.

Rebekah Flake is a Canadian-American artist using lens-based media and curation to explore migration narratives and the psycho-social effects of borders. Raised in Mississippi, she references the inescapable persistence of history in the forms of public memorials and personal reflections. Her practice also expands to Berlin, where she was awarded a DAAD fellowship, and to South Africa, when she and her colleagues at Temple University received an EPPY Award for media work in Johannesburg in 2013. She was also a 2015 Smithsonian Artist Research Fellowship finalist.

Jennifer Goya makes video art, experimental oral history documentaries, and interactive media pieces. Simulations of paradise recur throughout her body of work featuring deadpan representations of famous and imaginary images of Hawaii. Her on-going body of work is inspired by her time selling high-end t-shirts as a teenager in Waikiki. Jen Goya currently lives and works in Honolulu, Hawaii.

Hailey Hodge was an MFA candidate in printmaking at The University of Mississippi at the time of this show. Her current work focuses on distortions of memory. “By seeking my past memories, I am reconnecting and re-remembering, which allows me to create new memories based on the old. I am destroying photographs and videos of nostalgic moments in my life. Through digital and sound editing software, I am able to glitch the data to alter the image.”

Valerie Guinn Polgar is a new media artist, an educator, and founder of misbits: a new media art space. Her work addresses issues of impermanence and fragility through the use of surrogate forms. As an interdisciplinary new media artist, Valerie uses video, animation, and physical computing to create digital and interactive works. Valerie feels that the nature of new media lends itself to the use of surrogate forms within a safe environment where she possesses the control to save and duplicate her work—essentially allowing her to create immortal models of mortality.

Reiko Yamada is a composer and sound artist, originally from Hiroshima, Japan, and currently working on a project in Barcelona, Spain. She composes concert works, creates sound art installations and works with interdisciplinary collaborators. Her work explores the aesthetic concept of imperfection in a variety of contexts.